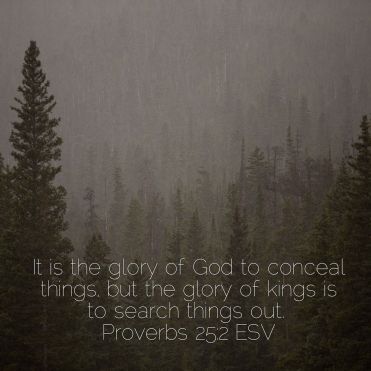 At first glance, this verse seems a little odd. God conceals and man searches things out? It sounds like a cosmic Easter Egg hunt where man is continually searching for the colorfully decorated, yet hidden truths of God, while the Father watches on in amused pleasure.

But this is not the purpose of this verse at all. It is not purporting a deistic “hide and seek” relationship with God. Rather, it is reminding us of how the relationship ought to be, how far we have strayed from that design, and is calling us back to living in proper subjection to the Father.

The arrangement of God concealing and man searching puts things in its proper order. The concealing of things establishes a thirst and a curiosity and a hope that would have never existed in man. For if one sees, he will not have need of hope, and if one understands, he will have no joy in discovery. It is no secret that the value of an object or of a truth is always equal to the rarity of, the desire for, and the accessibility to that thing. For instance, gold is valued because it is rare, highly desired, and not accessible to all. But if gold was commonplace, if it was not rare, it would lose its value for it would be easily accessible and lightly desired. Similarly, if gold remained rare, but no one viewed it as desirable or useful, then the value of gold would diminish tremendously. But when an object is both rare and highly desired, the only way to establish it as having supreme value above all other similar objects is to conceal it. Thus, God and His Truth and all the mystery that surrounds them are established as that which is to be concealed in order to set Himself apart from all other gods, worldviews, and glories as supremely valuable.

Such an arrangement brings God glory. He does not want to remain inaccessible to man forever. To do so would diminish His value and His glory. Rather, He wants to be found. But if He did not conceal Himself or His Truth, the person who received Him would not properly respond to this gift. But when He is concealed and a person discovers the kingdom of God like a treasure buried in a field, then in his joy he will go and sell all of His possessions so that he can buy that field and retain that priceless treasure forever. It is this response, the one of insurmountable joy coupled with the inestimable denial of all you once held as valuable, that gives God glory. In this way, we see that the concealment is not only to elevate the worth of God in our eyes but is also to elevate our joy and appreciation for what has now become our own.

Similarly, “the glory of kings is to search things out.” Kings, in Old Testament days, were God’s representatives to the nation of Israel, just as we Christians are Christ’s ambassadors to this world. If those who represent God will not seek out the concealed things of God, then they will be unable to share the value of God to others. But if they pursue God and His eternally unfolding mysteries, they not only benefit but also the people under their charge. Although the joy these people will express for having received the gift of God and His salvation will first glorify God, the kings’ glory comes in the giving to his people of that which is rare, desired, and was once inaccessible to many.

However, the glory of God in concealment is not for our benefit only. As the scripture tells us, such concealing is also for God. “It is the glory of God to conceal things.” As the supreme God and the supremely valuable One in all the universe, He alone holds the authority to reveal or to conceal. Both actions bring glory to God.

In revelation, God chooses to bridge the gap between Himself and man and provides man access to the character, will, words, emotions, and person of God. Such vulnerability allows a man to see God for who He truly is, instead of making “educated guesses” from the workings of a depraved mind. Plus, this vulnerability permits him to have the opportunity to reconnect with God in the pure and holy way God originally designed and desired for man to relate Him. For this reason, we are told, “Ask and it will be given to you; seek and you will find; knock and it will be opened to you.” (Mt. 7:7) So, in revelation, God gets the glory by being sought and found.

Whereas revelation includes mysteries that can be understood, concealing does not. In concealing, God chooses to hide parts of Himself to maintain and emphasize His separateness from man. The mysteries unique to concealing are those things that are unique to God alone. They include, but are not limited to, God’s majesty and dignity, glory and splendor, His sovereignty, wisdom, and unfathomable knowledge of creation. (Job 38 – 42). His grace. His love. His predestined plan from the foundations of the earth. Such are the things that force a man to his knees and compel him to proclaim, “Behold, I am of small account; what shall I answer you? I lay my hand on my mouth. I have spoken once, and I will not answer; twice, but I will proceed no further.” (Job 41:4-5)

If God were to reveal all things to man, man would mistakenly assume that he was relating with an equal. Such a belief would only repeat the fault of original sin whereby man presumed to be like God and set himself in opposition to God through the assumption of the knowledge of good and evil. Therefore, God conceals some things from man to protect us from both His wrath and the folly of our depraved minds. He conceals things so that we may always live in a proper relationship to Him, knowing that He is infinitely holy and sovereign and good and wise, and we are not.

To challenge the concealed things of God does not glorify God nor does it engender praise. Such behavior only rebels against Him and demands an answer where none is permitted to man. Thus we are reminded “who has known the mind of the LORD, or who has been his counselor?” (Rom. 11:34). But when God conceals these things from man, He surrenders nothing of His uniqueness. All things remain from Him and through Him and to Him (Rom. 11:36), calling man out of his ostentatious existence and back into the original design where man is subjected under God, “that God may be all in all” (1 Cor. 15:28). And where the heart of man may continuously proclaim “To our God and Father be glory forever and ever. Amen.” (Php. 4:20).

Thus we can say with Solomon: It is the glory of God to conceal things, but the glory of kings is to search things out.

Join 243 other subscribers
Follow living in the tent on WordPress.com