The subject in my Sunday School class today was: “Is God relevant for the culture?”

This topic spurred a lot of discussions as the teacher covered the doctrinal nature of God, continually poked and prodded us with challenging questions and encouraged us to consider how the culture views God.

But one comment from a fellow student stood out to me among the others.  She noted that when people have a question today, they do not seek guidance, wisdom, or knowledge from God or His Word. Instead, they Google it.

Sadly, I had to agree with her.

Gotta tickle in your throat?

Want to know when the movie starts?

Want to know the meaning of life?

Google it? Yes, Google it!

You may not get very far, but hey “about 1,080,000,000” results pop up, including everything from Wikipedia to varying religious beliefs to the number 42, so you should at least be busy for a while.

When you think about it, Google has become the culture’s main source for information on almost everything, and unlike the common perception of God, it (allegedly) does not impose a preconceived value system on the user. Rather, it allows the user to gather the information on his own, decide what is relevant or irrelevant to his life/life-choices, and then use this information in the best way the user sees fit. In short, it promotes and values a person’s autonomy to discern what is best for their life.

God, on the other hand, does not offer us humans freedom through autonomy. He offers us freedom through truth. This has been the arrangement ever since Adam and Eve’s original attempt to gain freedom from God through the exercise of their autonomy when God, in His wisdom and love, prevented them from eating of the tree of life (which would have condemned them to a permanent, sinful state) and used the power of His Word (the same power that spoke creation into existence) to proclaim the truth that Christ would one day provide man with freedom from the evil one (Gen. 3:15).  This principle of “freedom through truth” was continually emphasized throughout scripture as the Torah provided man the principles he needed to maintain a holy life, free from sin. It is no surprise, then, that when Christ came to reveal God to us in the flesh, this powerful and effective truth took center stage as He reminded everyone, “I am…the truth” (Jn. 14:6) and “you will know the truth, and the truth will set you free.” (Jn. 8:32)

But regardless of whether one prefers to go to God or to Google for the answer to one’s most existential questions, one fact remains patently clear: man’s desperate need for answers recognizes the need for a transcendent authority to provide guidance, wisdom, and knowledge to his life. There seems to be an innate understanding and a silent agreement amongst us all that we cannot do life on our own. To figure out how to proceed well, we must submit and order our lives around something bigger and better than ourselves. Some will submit to the wisdom of man on the internet. Others will submit to the holiness of God. Either way, each one is seeking freedom from what is broken within him.

The question, of course, is who will you allow to direct the course of your life? Google or God? 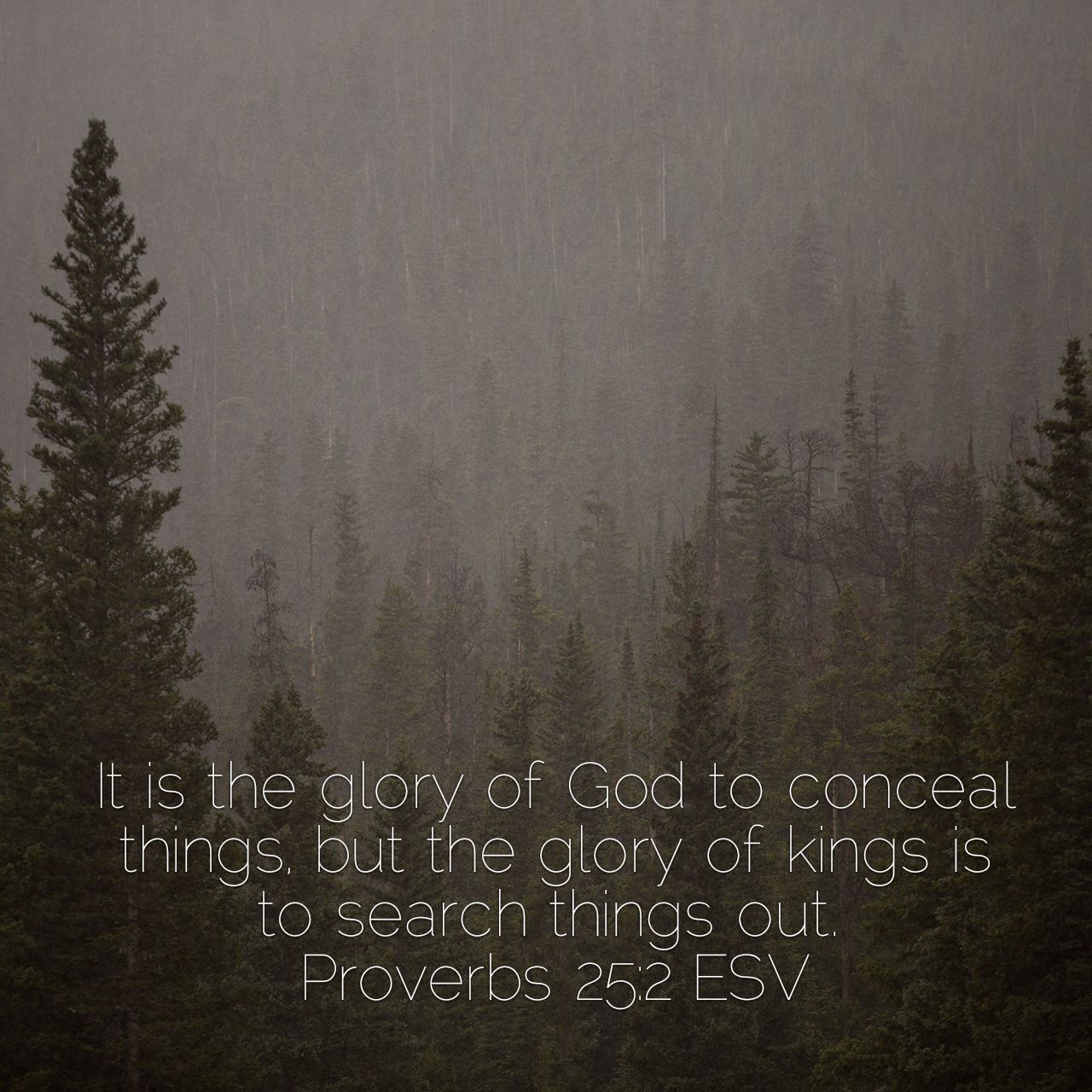 At first glance, this verse seems a little odd. God conceals and man searches things out? It sounds like a cosmic Easter Egg hunt where man is continually searching for the colorfully decorated, yet hidden truths of God, while the Father watches on in amused pleasure.

But this is not the purpose of this verse at all. It is not purporting a deistic “hide and seek” relationship with God. Rather, it is reminding us of how the relationship ought to be, how far we have strayed from that design, and is calling us back to living in proper subjection to the Father.

The arrangement of God concealing and man searching puts things in its proper order. The concealing of things establishes a thirst and a curiosity and a hope that would have never existed in man. For if one sees, he will not have need of hope, and if one understands, he will have no joy in discovery. It is no secret that the value of an object or of a truth is always equal to the rarity of, the desire for, and the accessibility to that thing. For instance, gold is valued because it is rare, highly desired, and not accessible to all. But if gold was commonplace, if it was not rare, it would lose its value for it would be easily accessible and lightly desired. Similarly, if gold remained rare, but no one viewed it as desirable or useful, then the value of gold would diminish tremendously. But when an object is both rare and highly desired, the only way to establish it as having supreme value above all other similar objects is to conceal it. Thus, God and His Truth and all the mystery that surrounds them are established as that which is to be concealed in order to set Himself apart from all other gods, worldviews, and glories as supremely valuable.

Such an arrangement brings God glory. He does not want to remain inaccessible to man forever. To do so would diminish His value and His glory. Rather, He wants to be found. But if He did not conceal Himself or His Truth, the person who received Him would not properly respond to this gift. But when He is concealed and a person discovers the kingdom of God like a treasure buried in a field, then in his joy he will go and sell all of His possessions so that he can buy that field and retain that priceless treasure forever. It is this response, the one of insurmountable joy coupled with the inestimable denial of all you once held as valuable, that gives God glory. In this way, we see that the concealment is not only to elevate the worth of God in our eyes but is also to elevate our joy and appreciation for what has now become our own.

Similarly, “the glory of kings is to search things out.” Kings, in Old Testament days, were God’s representatives to the nation of Israel, just as we Christians are Christ’s ambassadors to this world. If those who represent God will not seek out the concealed things of God, then they will be unable to share the value of God to others. But if they pursue God and His eternally unfolding mysteries, they not only benefit but also the people under their charge. Although the joy these people will express for having received the gift of God and His salvation will first glorify God, the kings’ glory comes in the giving to his people of that which is rare, desired, and was once inaccessible to many.

However, the glory of God in concealment is not for our benefit only. As the scripture tells us, such concealing is also for God. “It is the glory of God to conceal things.” As the supreme God and the supremely valuable One in all the universe, He alone holds the authority to reveal or to conceal. Both actions bring glory to God.

In revelation, God chooses to bridge the gap between Himself and man and provides man access to the character, will, words, emotions, and person of God. Such vulnerability allows a man to see God for who He truly is, instead of making “educated guesses” from the workings of a depraved mind. Plus, this vulnerability permits him to have the opportunity to reconnect with God in the pure and holy way God originally designed and desired for man to relate Him. For this reason, we are told, “Ask and it will be given to you; seek and you will find; knock and it will be opened to you.” (Mt. 7:7) So, in revelation, God gets the glory by being sought and found.

Whereas revelation includes mysteries that can be understood, concealing does not. In concealing, God chooses to hide parts of Himself to maintain and emphasize His separateness from man. The mysteries unique to concealing are those things that are unique to God alone. They include, but are not limited to, God’s majesty and dignity, glory and splendor, His sovereignty, wisdom, and unfathomable knowledge of creation. (Job 38 – 42). His grace. His love. His predestined plan from the foundations of the earth. Such are the things that force a man to his knees and compel him to proclaim, “Behold, I am of small account; what shall I answer you? I lay my hand on my mouth. I have spoken once, and I will not answer; twice, but I will proceed no further.” (Job 41:4-5)

If God were to reveal all things to man, man would mistakenly assume that he was relating with an equal. Such a belief would only repeat the fault of original sin whereby man presumed to be like God and set himself in opposition to God through the assumption of the knowledge of good and evil. Therefore, God conceals some things from man to protect us from both His wrath and the folly of our depraved minds. He conceals things so that we may always live in a proper relationship to Him, knowing that He is infinitely holy and sovereign and good and wise, and we are not.

To challenge the concealed things of God does not glorify God nor does it engender praise. Such behavior only rebels against Him and demands an answer where none is permitted to man. Thus we are reminded “who has known the mind of the LORD, or who has been his counselor?” (Rom. 11:34). But when God conceals these things from man, He surrenders nothing of His uniqueness. All things remain from Him and through Him and to Him (Rom. 11:36), calling man out of his ostentatious existence and back into the original design where man is subjected under God, “that God may be all in all” (1 Cor. 15:28). And where the heart of man may continuously proclaim “To our God and Father be glory forever and ever. Amen.” (Php. 4:20).

Thus we can say with Solomon: It is the glory of God to conceal things, but the glory of kings is to search things out.

Join 243 other followers
Follow living in the tent on WordPress.com