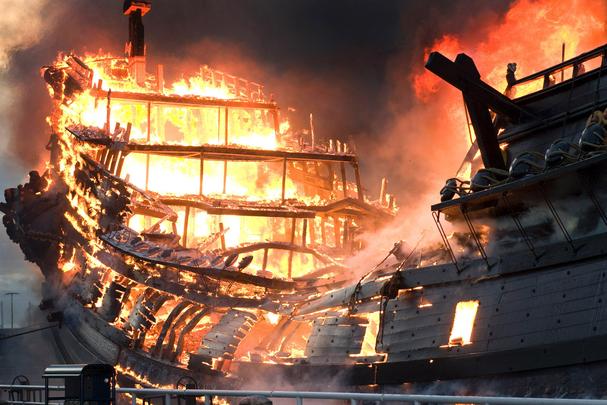 In 1518, Cortez sailed from Spain with 11 ships carrying 500 soldiers and 100 sailors. The goal was to conquer the Aztecs of Mexico. But when they landed on the Mexican coast in 1519, the indigenous people far outnumbered Cortez and his crew. Fear set in for many and some of the men developed a secret plot to retreat to Cuba. It was safer there and they could wait for reinforcements.

But when Cortez learned of this treachery, he refused to listen to the plan of retreat. Instead, he did the one thing that no one would have expected him to do. He ordered his men to burn the ships. “The only way we will leave this land,” he told his men, “is in death!”

Incredibly, the men rallied behind their commander and conquered the Aztecs’ empire, which had been around for over 600 years.

How did they do it?

Simple. They burned all of their avenues of retreat, leaving themselves only one direction in which to move — forward.

Think about that for a moment.

When you take the time to look at your “have to” list or when you sit down to begin tackling your impossible dreams, what avenues of retreat do you permit yourself? Social media? Alcohol? Hanging out with friends? Netflix? Menial chores? Self-beratement?

OR…Maybe you are more clever than that.

Maybe, as you attempt to move your desire into an actionable plan, you provide yourself with the following avenues of retreat:

Or maybe you use one of the following words to weasel out of actually doing anything at all:

Now, take a moment. Go back over the list and ask yourself which of these avenues of retreat sound like you? What practical steps would it take for you to burn these ships?

What would happen if you destroyed ALL of the avenues of retreat in your life so that only ONE path was open to you: the path forward?

What dreams could you begin to accomplish? What goals would you have stripped of the word “impossible?” What excuses would no longer be available? What dreams would you have forced out of your head to become a reality in the world around you? What impact would you make not only in your life but also on those who came in contact with your realized ambitions? What would you be able to do if you honestly assessed your life and decided, right now, to lay the torch to the deck and burned the ships?

(¹Taken from a handout entitled “How to Slide Through Treatment and Stay Sick.” Author Unknown)

One thought on “Burn the Ships”